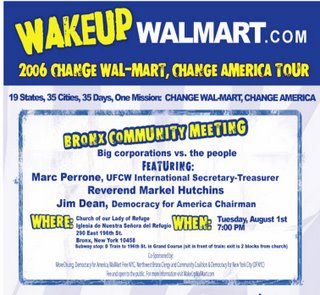 Some "critics" are questioning our passionate efforts that encourage responsible employers... We question why the richest and largest employer in the world refuses to provide Health Care to it's employees... At our town meeting we will discuss the effects Wal-Mart has on entire communities throughout the world. Also how Wal-Mart target specific communities such as the Bronx. Many seats are being RSVP'd so email us walmartfreenyc@yahoo.com to RSVP yours as soon as possible.

Here is the WakeUpWalmart Flyer, If you'd like any of our flyers sent to you email walmartfreenyc@yahoo.com.

Wal-Mart defeats Maryland, but not Chicago

Recently defeated legislation that would require big box stores to provide health care to employees was passed yesterday afternoon when the Chicago City Council passed legislation requiring "big box” stores, like Wal-Mart and Home Depot, to pay a minimum wage of $10 an hour by 2010, along with at least $3 an hour worth of benefits. The ordinance, imposing the requirement on stores that occupy more than 90,000 square feet and are part of companies grossing more than $1 billion annually, is the first in the country to single out large retailers for wage rules.
Read the NYT Report
Posted by WMFNYC at 7/27/2006 10:33:00 AM No comments: Links to this post

Come Join us for a special night

for a Special Evening

*Check either the 5 Train or 2 Train*

*Refreshments will be served*

Marylands "Fair Share Act" was defeated this week when Judge J. Frederick Motz dismissed the bill for what he calls a bill that "didn't really provide health care to anyone" The law would require any private company which employed more than 10,000 workers to spend the minimum of 8% of its salary expenses on Health Insurance...OR write a check to the state for the difference.

Although the Bill was defeated it did pressure Wal-Mart to improve its Health Care situation and is a definite step in the right direction. Read the NYT Editorial on the decision
Posted by WMFNYC at 7/21/2006 01:06:00 PM 1 comment: Links to this post

Wal-Mart will open a store in a nine-story building in downtown White Plains tomorrow, an urban model that the retailer hopes someday will work in New York City.

Last month, the nation's largest retailer opened another store just seven miles from Manhattan in Kearny, N.J., as part of its strategy to encircle the city with stores.

The director of corporate affairs for Wal-Mart in the Northeast, Steven Restivo, said the new stores were part of a strategy to increase Wal-Mart's presence in the tri-state area. He said that more announcements of area openings are expected this fall.

We all must work together to stop Wal-Mart from entering our unique city, please stay active, sign up for email updates and check our sites for more information on what we are going to do to put a stop to this.

As if destroying small local business wasn't enough for the worlds worst and largest employer, they are now targeting small banks. As you know last year when Wal-Mart applied for a bank charter in Utah, they continually pledged that they would not open it's own branches.
Now local bankers are growing extremley weary of what they call "a wedge to allow Wal-Mart to begin branch banking and eliminate local banks"
Read the entire report here : Chicago Tribune Report
Posted by WMFNYC at 7/17/2006 09:33:00 AM 1 comment: Links to this post

Wal-Mart said the change would allow it to focus on theft by professional shoplifters and its own employees, who together steal the bulk of merchandise from the chain every year, rather than the teenager who occasionally takes a candy bar from the checkout counter, according to the report.

The report said it may also serve to placate small-town police departments across the country who have protested what the company has called its zero-tolerance policy on shoplifting. Employees summoned officers whether a customer stole a $5 toy or a $5,000 television set - anything over $3, the company said.

At some of the chain's giant 24-hour stores, the police make up to six arrests a day prompting a handful of departments to hire an additional officer just to deal with the extra workload, the Times added.

The changes in Wal-Mart's theft policy are described in 30 pages of documents that were provided to The New York Times by WakeUpWalMart.com.
Check out WakeUpWalmart for the leaked document.

Wal-Mart Forces employees to search for Bombs in Store

Managers at local Quebec Wal-Mart forced employees to search the store after it received a bomb threat.

Some 40 nervous employees searched the store for an hour last Thursday, said Mailie Fournier, a former employee of the store. They were accompanied by six police officers.

The incident prompted Quebec workplace health and safety board to investigate.

According to police, the store didn't violate any laws and only had an obligation to evacuate the store if a suspicious object was found.

Customers in the store about 60 kilometres east of Montreal were, nonetheless, asked to leave the premises.

Although nothing was found, this a prime example of how Wal-Mart treats their 'associates'. This is one of the most ridiculous stories of Wal-Mart's antics I have ever encountered. Putting employees directly in harms way.
Posted by WMFNYC at 7/12/2006 12:14:00 PM No comments: Links to this post 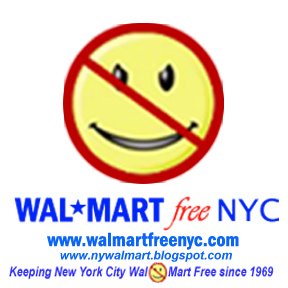 Here is the WMFNYC Flyer for this weeks Bronx Community meeting....
Feel free to click on it and print it out to hand out to local residents.... If you have any questions regarding the meeting please email Fedele1500@aol.com or edwinelynch@aol.com

Lawyers for Wal-Mart Stores Inc. workers who won a $172-million verdict involving missed meal breaks in December asked a judge Monday to order the retailer to pay for missed rest breaks and urged the appointment of an independent monitor to ensure that it complied.

One of every 10 Wal-Mart employees in California isn't being paid for missed breaks, violating a state law that requires they get an extra hour of wages, attorney Jessica Grant said at a hearing before Judge Ronald Sabraw in Alameda County Superior Court in Oakland. Wal-Mart knew as far back as 1998 that workers couldn't take breaks because of understaffing, so the company stopped requiring them to clock in and out of rest periods to conceal evidence, she alleged.

An order in favor of the workers might force Wal-Mart to keep records on rest breaks, reinstate audits and pay for monitoring, while providing ammunition for employees in other cases.

Wal-Mart attorney Vineet Bhatia told Sabraw that an injunction wasn't needed because the company already complies with California labor laws, which don't require employers to make workers clock in and out of rest breaks. Data from the workers that show 360,000 breaks were missed don't specify whether employees chose not to take them or were coerced, he said.

"The proper way to prove it is to show there was actual management coercion," Bhatia said. "In every one of those 360,000, it was equally likely that it was the associate's decision not to take the break."

Wal-Mart Stores said a labor board blocked a union from organizing staff in the auto department at a British Columbia outlet because it can't be separated from the rest of the store.

The United Food and Commercial Workers sought to organize 10 employees in the Tire Lube Express department of a store in Cranbrook, Wal-Mart said in a statement Tuesday. Targeting them as a separate unit was "inappropriate," British Columbia Labour Relations Board Chairman Brent Mullin said in a June 30 ruling.

The company currently has a single unionized store, in Quebec.