Image by Getty Images via @daylife
Thursday, we're bringing together workers from multiple points in the Walmart supply chain to tell how the world's biggest retailer keeps workers in a cycle of low wages, no voice on the job, and dangerous working conditions. Speakers will include a Walmart associate, a warehouse worker, and a Bangladeshi garment worker.  Join us! RSVP and more info on Facebook!
From Walmart Watch:

Walmart wants to open stores in New York City. The company is spending a lot of money to change the debate from the real issue, which is how it treats its associates and creates poverty-level jobs throughout its supply chain. As the world’s largest retailer, how Walmart impacts workers across the globe is a good preview of what kind of jobs it is going to try to bring to NYC.

Three workers representing different links in the Wal...mart supply chain will be appearing in New York on Thursday, March 31th as part of Sweatshop, Warehouse, Walmart: A Worker Truth Tour.

Robert Hines worked until very recently in a Chicago-area warehouse that supplies Walmart.

Cynthia Murray works in a Walmart store in Laurel, Maryland.

Aleya Akter is a young woman from Bangladesh who has worked in garment factories since she was nine years old, sewing the clothes sold in U.S. Walmart stores.

Kalpona Akter is a former garment worker and director of the Bangladesh Worker Solidarity Center who was imprisoned after a Walmart subcontractor brought falsified complaints against her.

Tour sponsors include Making Change at Walmart (a campaign of the United Food and Commercial Workers), Jobs with Justice, International Labor Rights Forum, United Students Against Sweatshops, and SweatFree Communities.

Walmart Buys its way into Africa "Despite the advent of democracy in 1994, South Africa remains one of the most inequitable societies in the world. The acquisition of 51% of Massmart by Walmart will cut out even more local ownership of one of the major retail players in the country."
-Tyotyo James, deputy-president of the Congress of South African Trade Unions. After Walmart's 51% bid on the major retailer Massmart was approved this week. "Walmart buys its way into Africa"
It's not just a domestic problem with Walmart, across the world they're notoriously known for exploitation of workers and destruction of small business.  In South Africa they're getting a lot of resistance for buying out the retail chain Massmart and essentially monopolizing the South African retail market.
Now that the Massmart deal cleared all the regulatory hurdles, a massive boycott is being planned for all Walmart/Massmart affiliated stores. [Financial Mail]

Here's something you don't see everyday, Walmart telling the truth.
The ingenious website www.walmartnyc.com which claims to promote real New Yorker opinions, is promoting a report from ABC News which covered NYC Public Advocate's Bill de Blasio's report that if a Walmart were to open in NYC retail wages would suffer.  Here's a screen shot from WalmartNYC's newsroom:
We love how the logo above reads, "Helping NYC Save Money and Live Better", while they source studies that argue they'll lower retail wages. 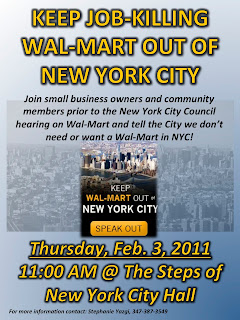 Rally to Keep Job-Killing Wal-Mart Out of NYC 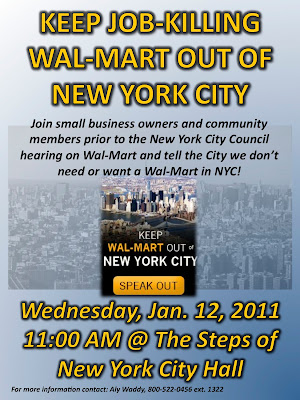